Sounds of the Sprawl

Prepare your datajack for a driveload of global cyberculture, friend.

Remix your mind and your DNA with the transhumanists of Tangaroa. Screen yourself from the UV, the corps, and the nanobots in Aotearoa. Swim through the stifling oppression of law and history in the capital of the European Federation.

Resist the corporate boot crushing the last bastion of North American freedom. Blow over the agri-prison baseline and the voodoo hooks of the Big Easy. Slink out of the lab and into the streets with keen eyes, sharp claws, and a vengeful mind.

Circle with the sharks of the Global Giant of Africa: smell the fire in their spirits and the spirits in the fibres. Dance from terrace to tower in the Paris moonlight, rapier in hand, honour in mind. Take down the fat cats and the dirty dogs with anthropomorphic abandon.

Play in the Caribbean sand or slog through the Florida swamp at the nexus of terrestrial and orbital borders. Fight your way free from the bleeding edge of militarised capitalism at the fractured terminus of a new Korean cold war. Kick against the current in SoCal’s melting pot of simsense dreams, global commerce, and covert water wars.

Twelve new ways to experience The Sprawl. Are you ready for the November Metric?

November Metric is a 150 page setting supplement for The Sprawl. It includes twelve settings ranging from arcologies to sprawls to nation states to cat-based conceptual overlays; you can use them as-is, or mine them for inspiration for your sprawl.

Check out the awesome cover art by Vira Sakhniuk! 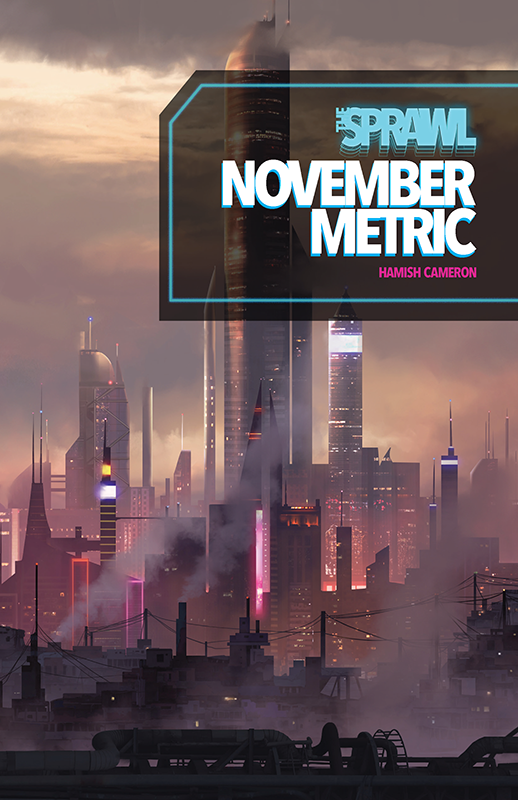 At the moment, November Metric is only available in PDF. We’re working on the Print on Demand files, so physical copies should be available in a few weeks. [Print and PoD are both now available on the DTRPG page!]

November Metric was originally funded as Stretch Goal 003 of the Kickstarter (backer update here). The next supplement will be a book of ten missions in much the same format as “The Kurosawa Extraction” example mission from the book.