When Corporate Hell is not a Metaphor

Touched: A Darkening Alley is the first of a series of stand-alone settings introducing magic into the world of The Sprawl.

The cyberpunk future is already a horror show. Now it gets supernatural…

“The shit-holes are getting shittier, and no one wants to talk about it. The town that disappeared, that video of a lady giving birth to what looked like an octopus, or the leaked corp files about a continuous human scream emanating from Jupiter. Why aren’t the news feeds talking about this? What are the corps hiding?”

It’s 1985. Ever since Nixon privatised the Vietnam War, we’ve been an a downhill slide into corporate hell. We all thought that was a metaphor, but maybe we were too optimistic. A Darkening Alley is a low-magic, dark horror setting for The Sprawl. Rifts in the fabric of space are starting to crack, opening portals to strange new worlds filled with beings and energies far beyond our understanding; humanity is beginning to feel the effects. Strange happenings are becoming more and more common. The street-side prophets are starting to sound a bit reasonable. The corporations smell power and have started pouring a lot of money into investigating and documenting these occurrences—that’s where you come in.

A Darkening Alley introduces the new Antiquarian playbook, a Trauma system by DYMPHNA, and several magical abilities available to players through basic advances. Because players do not start with magical abilities, you can easily merge this setting with an ongoing campaign. 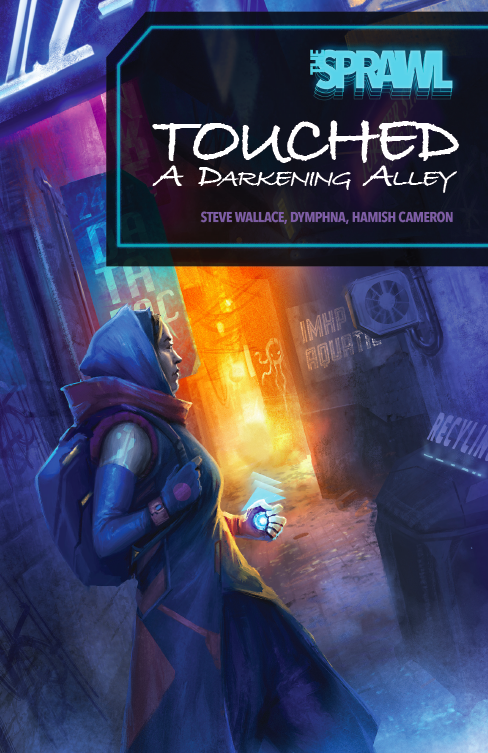 You can read about the production history and future of the Touched line in this backer update. The most important takeaway is that there are no plans for a PoD version of this product, but it will eventually be included with other Touched products in a future combined PoD book.

Hamish has been playing, designing and tweaking games since he discovered Fighting Fantasy gamebooks in the mid-80s. Most of that designing and tweaking has involved tabletop roleplaying games and miniatures wargames, but a few free-form larps and multiplayer team strategy games (now also known as "megagames") have snuck into the mix along the way. After a decade in Los Angeles, Maine, and other parts of the US, he is now back in Aotearoa. In addition to Ardens Ludere, he is part of the creative team at Cheeky Mountain Parrot Games.